Father Adrien R. Longchamps was born on October 14, 1948, in Manchester, New Hampshire, the son of the late Adrien J. and Rita (Martineau) Longchamps. He is the oldest of three children with two younger sisters.

His primary education was obtained at Saint-Augustin Parish Grammar School, from which he graduated in 1963. He attended Bishop Bradley High School, graduating in 1967. From June to August of that same year, he took summer courses at Saint Anselm College. Then, he studied for two years (1967-1969) at Assumption College in Worcester.

He spent his junior year of college (1969-1970) abroad studying Philosophy at l’Institut Supérieur de Philosophie at l’Université Catholique de Louvain in Belgium. In 1970, he was accepted as a seminarian for the Diocese of Manchester and assigned to the American College in Louvain. His theological studies were followed at the Faculté de Théologie at l’Université Catholique de Louvain, where he received a Bachelor in Sacred Theology in 1973. In June of the following year, he received a Master of Arts in Religious Studies and was also awarded a Licentiate in Moral and Religious Sciences (magna cum laude).
Ordained deacon in Louvain Belgium on 3 December 1973, and having completed his formation, he returned for assignment to the Diocese of Manchester in July of 1974. He served as Deacon at St. Mary Church in Claremont and St. Peter Church in Concord. On November 29, 1975, he was ordained a priest by the Most Reverend Odore J. Gendron in Saint-Augustin Church in Manchester.

In 2009, he was transferred to Manchester and began his service in the Manchester area chaplaincy. He has served as Chaplain in healthcare centers and nursing homes, including Hanover Hill, Mapleleaf, Hillsborough County, Villa Crest, St. Teresa Rehabilitation and Nursing Center and Bishop Primeau Apartments. He is still the Chaplain at Sisters of the Precious Blood Monastery in Manchester.

Since April of 2014, Fr. Adrien Longchamps has been ministering to us, here at St. John the Baptist in Suncook, as our Priest Administrator. We are happy to have him home with us.

Did you know…
Fr. Adrien has been a member of Secular Franciscan Order from Saint-Augustin Parish since 1965 and is a Fourth Degree Knight of Columbus, Bishop Bradley Assembly? He has been Chaplain for the Knights of Columbus, Our Lady of the Cedars Council 5260 since 1994 and a member of Club Richelieu de Manchester since 1992 (President 2006-2008). He was a member of Alhambra , El Feri Caravan 119. He is the State Chaplain for the Catholic War Veterans and Auxiliary (since 1979) and has been the State Moderator or Chaplain for l’Union Saint-Jean-Baptiste since 1977.

Before he came to serve us as our administrator, Fr. Adrien began celebrating the Traditional Latin Mass in our church as a visiting priest on first Sundays. He loves Liturgy, Gregorian chant, classical music, pipe organ music, Church History, genealogy, and stamp collecting (worldwide and some topical.) He has two cats, who are also in residence in the rectory. 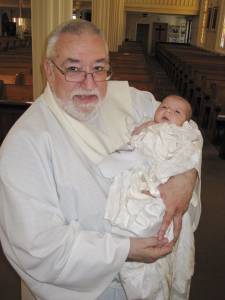