Father John B. Finnigan was born in Nashua, NH August 7, 1929, the eldest of the six children of the late Patrick and Margaret (Cotter) Finnigan.
His early education was in the Public and Catholic schools in Nashua, and he graduated from Nashua High School in 1948. In 1951, he attended the School of St. Philip, Boston, MA, a school for delayed vocations. The next year, 1952, he went to St. Francis Xavier University in Antigonish, Nova Scotia, Canada where he graduated in 1956, majoring in French.
He attended St. Augustin in Toronto, Canada as a seminarian. He was Ordained to the Priesthood at St. Joseph's Church in Nashua, by Bishop Primeau on June 3rd, 1961.
Father Finnigan served in the following Diocese of Manchester parishes: Whitefield, Plaistow, Dover and Milford, and as Pastor in Newton, 1974-1984, and Newmarket, 1984-2005 He retired in 2005, and came tio Suncook in 2006.
We are Blessed to have him with us! 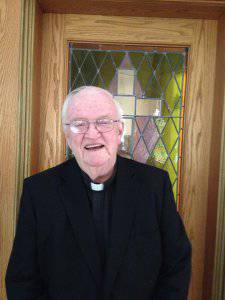